Design in space for life on Earth. 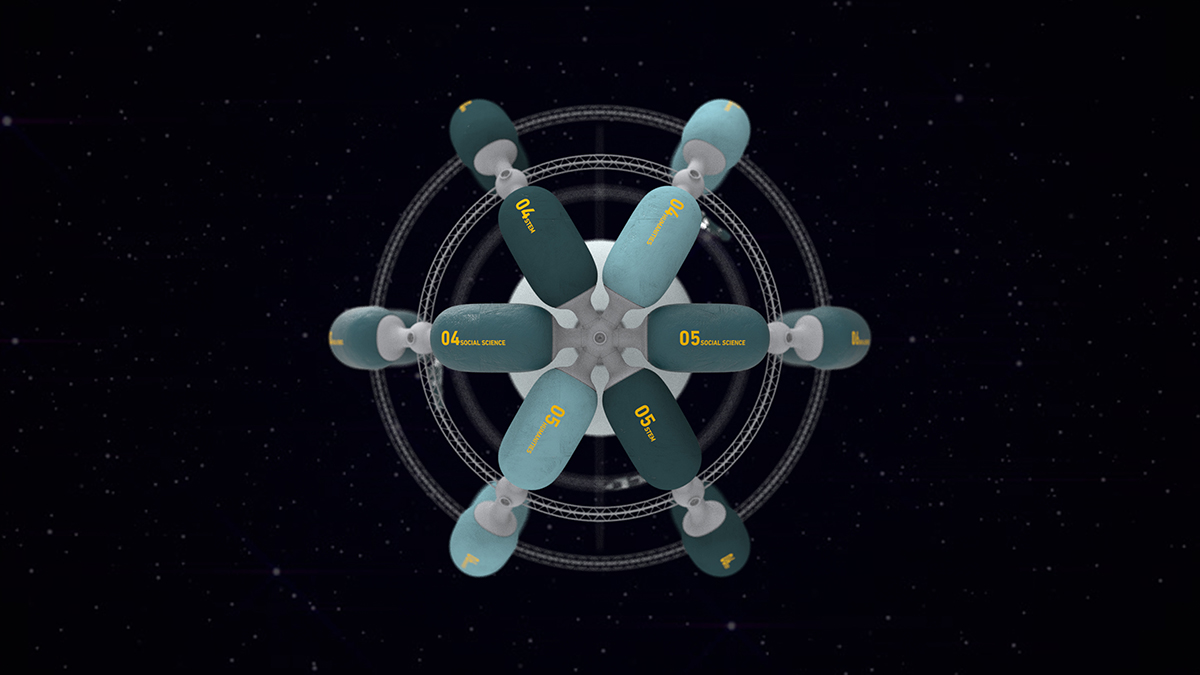 In October 2020, the World Design Organization and the International Space Station National Laboratory have teamed up to pose a question to the world: how can we design for space in a way that benefits life on Earth? To answer this question, five teams of perfect strangers were selected to develop ideas around three challenges:

• How can we build an orbital university?

• How can the ISS become a business incubator?

The Center for the Advancement of Science in Space supported this challenge as advisors by offering insight into the possibilities that exist through research and technology development aboard the orbiting laboratory. During this fast-paced virtual inter-design workshop, space industry leaders, researchers and designers gathered to bring tangible solutions to life and inspire the space industry to think beyond the expected.

Nonfiction's creative director Phnam Bagley was selected and placed in a team of 14 people spread over 10 time zones to answer to the challenge of "How can we build an orbital university?".

Before breaking down why we need an orbital university, it is important to understand why we need to reach space. One of our collaborators, Gary P. Barnhard, wrote this poem to express the physical and metaphysical arguments behind this choice.

Various design frameworks were used to explore, inspire, and organize complex thoughts. Online tools like Miro boards were quite useful to work in real time as were were all working in different time zones.

To build what we saw as The University of All Universities, we wanted to make the orbital university something that would revolutionize the future of education, open the whole world to the opportunity for higher education and research, and influence the way we live on Earth for the better.

The conception of the orbital university is told through the story of three people. The first one is Meera. In 2025, Meera is a 14-year-old girl from Haryana, India who dreams of going to space to understand the intersection between space and farming on land. Haryana is known for agriculture and for being the birthplace of the first Indian woman to go to space, Kalpana Chawla, an engineer and NASA astronaut who unfortunately perished in the Space Shuttle Columbia disaster in 2003. Meera has access to transportation and a tech infrastructure that enable her to learn the tools to become a space bioengineer when she grows up. Haryana will become one of the many land-based university centers that offers easy access to quality education, connectivity, security and opportunities for all students.

The International Space Station is an orbital laboratory where astronauts reside for varied stretches of time and conduct experiments. These include biology, health, physics, social science, fabrication, robotics and tech experiments. This unique environment is dangerous, isolated (250 miles from Earth) and disturbing to natural behaviors and cycles (microgravity, crew experiences 16 sunrises and sunsets a day). The ISS is set to retire in the next 10 years, but we want our Orbital University to start here as a docked module, then evolve into its own free-standing cislunar station. Our ambition is to send 4 people in space by 2025 to build the foundations of the Orbital University.

By 2050, we are planning to send 100 people into space aboard the Orbital University. A mix of students, faculty, staff and maintenance crew that serve the function of creating a safe, modular and inspiring space to invent, research and explore the limits of all disciplines. The Orbital University is made of a spherical arrangement of 3 rings of knowledge. The first ring represents STEM disciplines, including physics, robotics, and biology. The second ring represents Humanities disciplines, covering visual and performing arts, as well as history and languages. The third ring represents Social Science disciplines, which include economics, psychology and sociology. Each discipline lives in its own inflatable module. The ring intersect at two points, encouraging the development of integrative studies and experiments. At the center of the sphere lies a large inflatable module that serves as a lecture hall or a sports arena. Hard-shelled habitat modules flanked by solar panels live on the side of the sphere.

Brunella is a 48 year-old professor of biology at the Orbital University in 2050. Her background is in marine biology in extreme environments. When in isolation during various missions at the poles, what she misses most is the variety of aromas and flavors from her garden in Italy. She is now focused on guiding her students to research how to grow flavorful food and herbs in microgravity and partial gravity. When humans travel to Mars or stay on the Moon for months or years, she believes that supplementing the astronauts' diet with fresh, flavorful food will help with morale and focus during perilous missions.

Karsa is a 20 year-old art student from Iran in the year 2055. Many years back, astronauts from the International Space Station had photographed each other using the dramatic glow of the Earth to illuminate the subjects. The pictures were reminiscent of Renaissance paintings, yet were products of natural effects in an artificial environment. Additionally, Karsa has always been fascinated by Solar activity and has been working to translate this somewhat unpredictable roaring into beautiful sounds. By combining visual art forms floating in microgravity, the inimitable glow of the Earth into the picture and the modular translation of the Sun's activity, Karsa is pushing the limits of his art and welcoming his Earth-based audience to appreciate the beauty of the universe.

No space project happens without stages. What if we thought boldly and expanded the idea of the Orbital University into something gigantic, resembling a campus or city above the sky? What if we used the inspiration of an infinitely small structure, DNA, and built strong and meaningful structures that grow as much as our ambitions?

Space philosopher Frank White noticed that every astronaut that goes to space, no matter how hardened by the military or pragmatic, experiences a cognitive shift once they look back at Earth. They realize that our planet is small, fragile and somewhat insignificant in the vastness of the universe. These astronauts typically come back from their missions as humanitarians and staunch protectors of the environment. This is called the Overview Effect. At the Orbital University, we want to give each student, faculty and staff the opportunity to experience that shift, and in time, influence the way humans treat Earth and each other.

A very exciting feature of the orbital university is the access to unique facilities with extreme environments and conditions, such as microgravity, the vacuum of space, extreme cold and more. Additionally, Earth-based facilities can be multiplied to give access to more students over the world and encourage experimentation. Students like Meera could have access to real-time mapping of her region, take note of changes, and support the research she is conducting from the comfort of her local school.

Students get to experience a borderless education. They will be able to talk with anyone, from any country, as well as people who are in space or in a virtual environment. Where you live will no longer have an impact on the quality of education you have access to, as long as you have access to electricity and connectivity, which we plan to create as an essential expansion of the University of All Universities.

Send us an email to
info [at] nonfiction.design